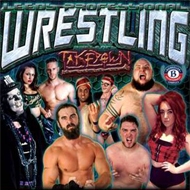 A selection of the UK’s top competitors will be battling it out in the ring on 18th April during Leeds Professional Wrestling’s latest event.

With wrestling’s roots spanning centuries and global interpretations, its popularity comes as no surprise. However, considering the current lack of televised coverage of the sport, awareness of it has been on quite a downwards slope. So in the wake of this decline, live wrestling shows have been making a comeback – and Leeds Professional Wrestling (LPW) will be marking its eighth event, showcasing some of the UK’s most recognisable fighting stars.

LPW’s Takedown is heading to Harehill’s Working Men’s Club on 18th April; doors open at 7pm and the bell time is at 7.30pm, tying in with the local promotion’s focus on family-friendly entertainment. The venue is located on Cowper Road, previously considered a popular hive of activity for the Jewish community.

Just some of the highlights planned for Takedown include JD Boom with Kev Cash taking on Caz Crash in a Cruiseweight Championship Match, and Prince Ameen will be battling The Commando with Commander Katrina in an International Challenge Match.

The evening will be a throwback to wrestling’s dominance in Leeds throughout the 1960s to 1980s in which many visited the weekly wrestling bouts at Leeds Town Hall where the likes of 007 villain Mr Oddjob and Big Daddy took to the ring.

On a larger world-wide scale, a number of the sport’s most memorable competitors derive from Jewish faith. William Goldberg is perhaps the most well-known face, rising to fame with an undefeated streak of over 150 matches, and Andy Savage too holds links. Memorably, the Jewish heavyweight Al Korman came to Britain from Toronto and worked with his friend Whipper Watson between 1936 and 1939.

To go along and join in the fun, tickets to LPW’s Takedown cost £10 per adult and £5 for children under 12 years of age, and are available at the venue or on the door. A family ticket can alternatively be purchased for £25, covering two adults and two kids.

For more information, visit Facebook.com/pages/Leeds-Professional-Wrestling. And if you have any wrestling stories that you would like to share, email sarah@nutsforprint.co.uk.