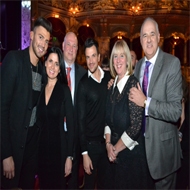 The star-studded Voice of Charity event in Harrogate recently raised £60,000 for The Zone and Teenage Cancer Trust. John Fisher reports.

The Voice of Charity committee made their own voices heard to the tune of £60,000, to be split down the middle for The Zone and Teenage Cancer Trust (TCT), at the fundraiser of the season.

International pop-star Peter Andre was joined by Lloyd Wade, Stuart Kershaw and Jake Quickenden who took to the stage of Harrogate’s Royal Hall to judge the event.

12 talented contestants participated in the event, drawn from all over the country with four finalists chosen by audience vote. It was left to the judging panel to name the winner – 17-year-old Beth McCarthy, from York.