One for the Books 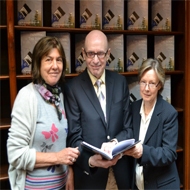 Painting the Town Silver, a memoir of the life of Leslie Silver OBE, has been penned by JLife’s John Fisher.

The new book charts the remarkable life and times of one of Leeds’ most well-respected members who died aged 89.

John tells how Eastender Leslie, born in 1925, moved to Leeds in 1940 to escape the Blitz and set up his first business, the Silver Paint and Lacquer Company Ltd, in Leeds in 1947 using his £250 demob gratuity from the RAF.

After a series of takeovers of rival firms, the business was renamed Kalon Group and was listed on the stock exchange. It achieved sales of £100 million a year by the time Leslie retired in 1991.

Leslie joined the board of Leeds United in 1981, and became chairman from 1983 until 1996, bringing in Howard Wilkinson from Sheffield Wednesday who reinvigorated the team which went on to win promotion from the Second Division to the First in 1990.

John also describes Leslie’s time in Bomber Command in 1944 as a flight engineer. Leslie told him: “There was no time for fear; we were very focused on the job.”

A generous philanthropist who supported a range of causes in and around Leeds and beyond, Leslie carried a moving letter from a beneficiary on his person for many years as a reminder of the effect giving charity can have on both giver and receiver.