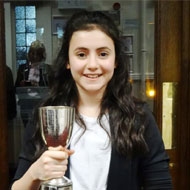 12-year-old Isabelle Graham, a pupil at Gateways School in Harewood, is celebrating after her victory at the annual Harrogate Competitive Festival for Music, Speech and Drama.

Leeds-born Isabelle fought off stiff competition as she sang her way to the top to scoop the highly coveted Yorkshire Post Trophy in the ‘Northern Chorister Championship Year 11 and under’ category.

Performing the hymn I Can Not Tell Why He Whom Angels Worship to the tune of the Londonderry Air, accompanied by pianist David Darling, Isabelle competed against 12 children in the class and was awarded Distinction for her beautiful and clear delivery of the text.  The adjudicator remarked that this was a voice she could listen to all day.

A gifted vocalist, this award runs alongside a number of other regional and national achievements. In February 2014, Isabelle was awarded a place in the prestigious National Youth Choir.  At 12 years old, she is just one of only 50 girls of her age group nationally who were invited to join the choir.

Isabelle also attends The Leeds College of Music every Saturday morning and recently played the role of Cissie Woodger in Opera North’s Production of Albert Herring by Benjamin Britten.

David Darling, Isabelle’s singing teacher, said: “I’m extremely proud of Isabelle’s achievements.  She is an incredibly dedicated and talented singer with a stunning voice and great technique, and it is so lovely to see this being recognized both locally and nationally.  I am very excited about her potential, and am confident that we will all hear a lot more from Izzy over the coming years.”