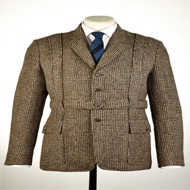 JLife’s Immy Share speaks to Natalie Raw, the co-curator of ‘Tailored: A Very British Fashion,’ about the current exhibition at Leeds City Museum.

How did the idea of the exhibition come about?

An Arts Humanities Research Council (AHRC) funded project took place with the University of Leeds and their history department and through this we found a researcher called Danielle Spercher. For her PhD, she was researching the Leeds tailoring industry after the Second World War from the fashion perspective, rather than the manufacturing perspective and therefore we based our exhibition on the fashion side also and Danielle became a co-curator of the exhibition. We wanted to show British fashion history and how tailoring has featured since the 18th Century.

What does the exhibition showcase?

The main focus of the exhibition is to show tailoring and fashion all the way from the 18th Century to modern day in both men and women. We have certain themes which include showing tailoring in work wear, country wear and evening/ ceremonial wear and we also show fashion designers who have used tailoring in their designs. We also wanted to show that tailoring doesn’t just happen in London and Saville Row, but in Leeds also.

What are the exhibition’s highlights?

We commissioned a new suit by a Saville Row tailor, Kathryn Sargent, who was actually born in and is originally from Leeds. We also have one of the earliest pieces of tailoring on display which is a child’s suit from the 18th Century; the suit is made of silk with a silver thread braid.

Another highlight is a Hepworth suit we have on show from 1964, designed by Hardy Amies. Hepworth was the second biggest tailoring company after Burton and Amies was a posh fashion designer who worked with them, doing a lot of work for the Queen also.

Leeds is known for its tailoring heritage. What can visitors find out about the city’s past?

On display we have a couple of pieces from Burton and Hepworth which are Leeds-based brands, but the idea was mainly to look at the fashion side of tailoring in order to get people in to the exhibition.

We already have a permanent tailoring gallery about Leeds at Armley Mills so we didn’t want to repeat what is there, however we aimed to tell people a bit about the city’s past in the hope they would then want to head to Armley Mills to find out more. We have a study day coming up in the autumn which focuses more on the Leeds tailoring industry specifically.

How important was the Jewish community to the textile and tailoring industry in Leeds?

The Jewish community was hugely important to the Leeds tailoring industry and particularly its development in the late 19th Century. Many Jewish immigrants escaping persecution arrived in Leeds at this time, bringing with them their skills and knowledge of tailoring and the clothes trade.

By the early 20th Century as factories started to take over from the smaller workshop, in producing tailored garments, their ability to expand heavily relied on the skills of the Leeds Jewish population. There were also many individuals from the Jewish community who went on to have great success running their business, with the most successful and best known being Montague Burton.

What influence did Montague Burton have within the tailoring industry and on the city?

Montague Burton’s influence on the tailoring industry in Leeds was massive. He was very much in favour of creating affordable suits to dress ‘the average man.’

Bespoke suits were being made on Saville Row which would require numerous fittings and measurements before they’re ready, and also made to measure suits being sold in standard places such as Marks & Spencer. Burton combined the two and made bespoke suits without the number of fittings in order to reduce the cost.

He took the measurements in his shops and they were then sent to a factory in Leeds to be made en-masse, lowering production costs. The fact Burton also had their own shops instead of making suits for a shop was another money saving method as the ‘middle man’ was cut out; they were completely in charge of the selling of the suits and had shops all over the country.

Though their name may not be as big anymore, they were the founder of and funded the Arcadia group, which includes huge high street shops such as Topshop, and so their legacy still lives on massively.

Can visitors access workshops and events linked to the exhibition?

Yes we have lots to offer. We have a Leeds Craft Hack taking place on 14th October which will be a very crafty day where visitors are given the opportunity to work with artists and textile artists, along with a study day at Leeds City Museum on the 20th October where we have various speakers coming in to speak about the Leeds tailoring industry. We also have curator-led tours of the exhibition taking place on the 22nd October and on 6th November we have a ‘Learn to Weave’ course for beginners.

For more details on the exhibition and events, visit Leeds.gov.uk.